How green is your city?

Siemens AG has published Green City Index - results of a study that shows environmental performance of the cities around the World. Top 3 places are occupied by Scandinavian cities which is no surprise for me.

Among 20 cities in Europe, Dublin is ranked 21st, with strong results in two categories: air and water quality. The overall score is dragged down mainly by two categories: transport and usage of land and buildings. These two factors fairly describe Dublin: horizontal layout (no skyscrapers), average public transport (a lot of people have something to say about it). If DART line was developed into an underground rail system, the results would be much better. Such a shame that project is currently on hold. 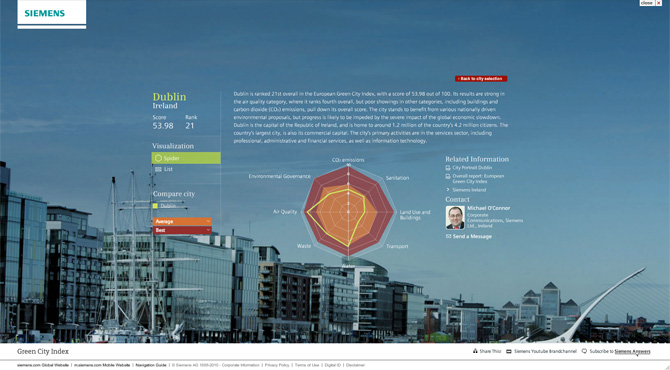 Meanwhile in my home country, Warsaw is ranked higher than Dublin (16th), thanks to Environmental Governance. Public transport scored more points (much more bus and tram lines), while water and air quality results are average.

The whole report is presented in a pleasant form (picture of a city as a background image) where results for each city can be compared with others. Well thought.

Got some comments or something to say? Feel free to express your thoughts on twitter, facebook, your blog or somewhere else...